Popular
You are at:Home»Sponsorship»25 Years of Special Olympics

As Special Olympics Gibraltar celebrate their 25th Anniversary, the Directors and Staff of Saccone & Speed (Gibraltar) Group of Companies, were pleased to present Special Olympics athlete Francis Mauro with a cheque for this year’s sponsorship on behalf of Coca-Cola. 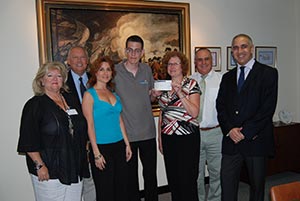 In the picture from left to right: Annie Risso MBE National Director Special Olympics, Denis Lafferty Group Managing Director Saccone & Speed, Karina Robba Administration Assistant S&S, Francis Mauro, Special Olympics athletes representative on the Executive committee.
Susan Beresford HR Manager, Stephen Payas Sales & Commercial Director, Prakash Nagrani Finance Director.
This year, teams from the Isle of Man, Iceland and Barbate are attending the Games which will be held from 1st to 3rd June.  To mark this special occasion, the Opening Ceremony is at St. Michael’s Cave with the traditional parade of athletes and the Special Olympics torch plus a few surprises in the way of entertainment.

The sporting events start on the 2nd June with the football competition in the morning at the Tercentenary Hall followed by the athletics in the evening at the Victoria Stadium.  On the final day is the swimming competition held at the Gibraltar Sports & Leisure Authority Swimming Pool.

Saccone & Speed (Gibraltar) Group of Companies wish the Gibraltar team successful Games and will be there to support them.