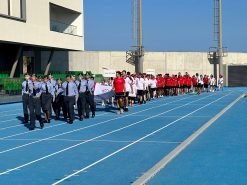 After years of disruption due to the pandemic it felt like a new era for sport in Gibraltar when the first Special Olympics Gibraltar National Games since 2019 opened at the Lathbury Sports Complex in September 2022. The Games were opened by Minister for Sport Stephen Linares who emphasized in his opening address that this would be the first such event to be held at Lathbury since the upgrade of the facilities. The complex certainly lived up to expectations providing a top-class running track, comfortable areas for athletes, spectators and guests, and a great backdrop for the international competition in this event from the Isle of Man.

The Games kicked off with the parade in of athletes from Special Olympics Gibraltar (SOG) and Special Olympics Isle of Man (SOIoM) led by the Gibraltar Air Cadets, to the applause and cheers from the crowd of families, friends, supporters and guests present in the stand. Following the opening address from Minister Linares SOG athlete Marvin Zammit read the Special Olympics oath. The Special Olympics flag which was raised had been paraded in by athletes from both teams. This was followed by runners from the Law Enforcement Torch Run with the Olympic flame who arrived after setting off 3 hours earlier from Saccone & Speed in Devils Tower Road and travelling around the streets of Gibraltar collecting money for Special Olympics. There followed the lighting of the Olympic cauldron by athlete Alexander McClelland, and the games commenced. 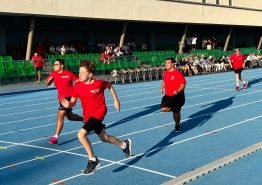 Once the formalities were over the athletics competition started. Races in 25m, 50m, 100m and 200m distances were followed by a 400m event and the final, much anticipated, 4 x 100m relay. Whilst there was a majority of local athletes in most events the SOIoM competition was fierce and honours were shared. The 25m featured golds for locals Naim Hasisen, Alexander McClelland and Daniella Vinent whilst in the longer distances Merlin Florkowski, Mark Dos Santos, Max Desoiza, Lucy Stewart, Glen Wimbleton, Sam Hook and Francis Mauro all brought home first medal positions, in the case of Mark twice! The highlight of the evening was the relay though which was a tense race with a thrilling finish. 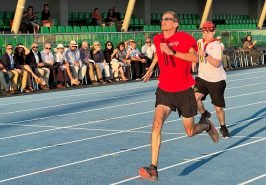 SOG had been leading comfortably for most of the race but a lightning last leg by SOIoM athlete Jamie Hardy recovered several metres on SOG athlete Francis Mauro to just pip him on the line bringing in the gold medal for SOIoM.

The following day started with the five-a-side futsal competition at the Special Olympics Sports Complex. SOG and SOIoM were joined by Algeciras in this 3-way challenge and SOG kicked off with a resounding victory 11 – 3 over Algeciras. Playing immediately afterwards against SOIoM it was a closely fought match in which SOIoM took an early but emphatic lead by half time. In the second half SOG really pulled out all the stops and came within one goal but in the end lost by 7 goals to 6. With an 8 – 1 victory over Algeciras SOIoM sealed their gold medal position with SOG getting silver and Algeciras bronze. 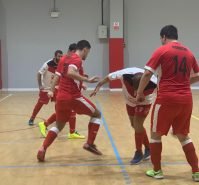 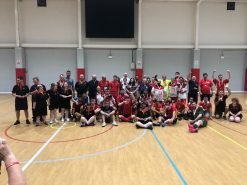 On Thursday evening SOG held a bocce competition this year as part of their National Games at the Bayside Sports Complex. This was the first time that bocce featured in the National Games and the competition was judged to be a resounding success. Two courts were used in the 3-hour long event with 4 Isle of Man and 6 local athletes competing in a doubles event and a team event, after some warm up singles games. The Isle of Man proved victorious in the doubles event with their two doubles pairs claiming gold and silver positions. But Gibraltar bounced back in the team game with a resounding 9 – 1 win to claim the gold medal. 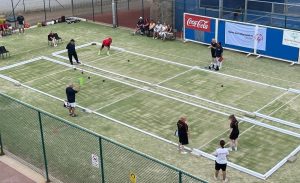 The bocce athletes were also competing for the inaugural Paola Poggio Memorial Shield. Paola was a long-time bocce coach in Gibraltar and SOG committee member who sadly passed away earlier on in the year. The shield was awarded to the team with the highest number of points overall and after being level-pegging right up to the end it was finally won by Team Gibraltar by 48 points to 37 after their emphatic win in the team game. The shield was presented by athlete Shane Martinez and members of Paola’s family who, along with a stand full of supporters including Government representatives from Gibraltar and the Isle of Man, were there to witness the success of this first such event. 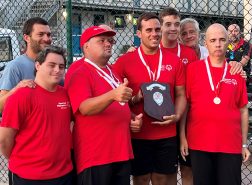 On the Friday morning a bowling competition was held at the Kings Bastion Leisure Centre. Once again SOG triumphed winning the team game against SOIoM by 1,218 points to 1,073 points. Earlier on in the day in the doubles games Shane Martinez and Marvin Zammit brought home the gold with 894 points, whilst Jan Lopez won gold in the singles with 340 points, ahead of Glen Wimbleton with silver and JJ Buttigieg in bronze position.

Later on Friday the swimming gala took place at the GSLA pool. In an exciting and entertaining event for those present, including Chief Minister Fabian Picardo and Sports Minister Stephen Linares, the athletes gave their all in the 10 races in the pool culminating in the 4 x 25m mixed relay race. Honours were shared between the SOG athletes with GlenWimbleton, Stephen Balban, Sallyann Mauro, Max Desoiza all bringing home gold medals whilst Ivan Mannion and JJ Buttigieg managed to win two each. In the relay 3 SOG teams and 1 SOIoM team competed with SOG achieving gold, silver and bronze forcing SOIoM into 4th position with Adam Stewart, Stephen Balban, Sallyann Mauro and JJ Buttigieg coming in first.

The Games finished with the usual barbecue at the Retreat Centre for athletes, families and volunteers where meals were cooked by the Law Enforcement Torch Run and music by Francis Avellano. A fitting end to a highly successful event.