Football, the very mention of the name is evocative of cheers, enthusiasm, energy and passion.  All of this was evident on a bright clear sunny day under the benign protection of our great grey limestone Rock.  Special Olympics Gibraltar was taking part in the tenth annual Special Olympics European football week. This year ladies football was being promoted as a means to reach more people with intellectual disabilities.   Special Olympics Gibraltar Unified met Gibraltar United/Bonita Trust ladies football team on the pitch and as with other teams through the day it was heartening to see inclusion in action.  The ladies played with style and skill and the Unified team had to work hard.  From the Unified team I asked Special Olympics athlete Marvin Zammit if it was different playing against girls?  “It was good”, he told me smiling broadly.  “Did you let them win?” I asked tongue in cheek.  His answer was an emphatic “NO”!   Good to see equality is alive and well.

The Challenge Shield was being played for as well as the prestige of ones club as eight teams participated.   A great ‘ambiente’, atmosphere, prevailed all day as children played, birds sang, Easy Jet and British Airways came and went but nothing distracted the players from the serious game of football which was being played on the seven a side pitch by the side of the runway.
All good things come to and end and this day was no exception.  All players had played with courtesy and dignity though never missing an opportunity to shine.  Our athletes put away some spectacular goals which in the end saw them take the Challenge Shield. During the day players were voting to award the title of Most Valued Player and it went to Jeremy Prescott. 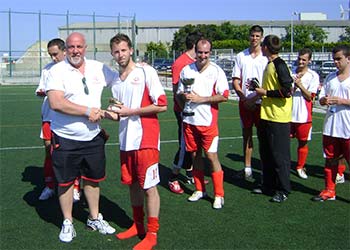 Jeremy Prescott receives his trophy for Most Valued Player of the tournament in the Unified team. He was voted for by all seven teams. Congratulations! 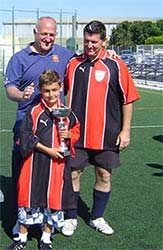 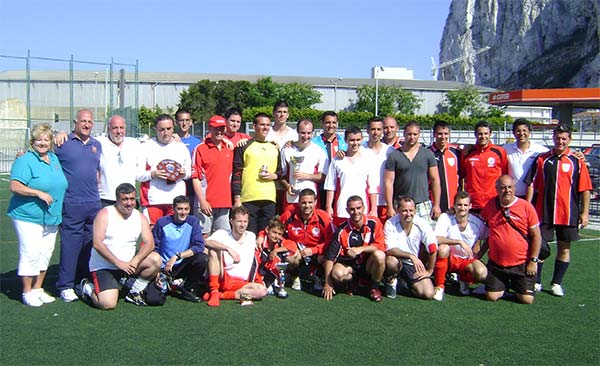 All together with Lincoln, who, with the other participating teams, proved worthy opponents and provided a day of fun, where no one talked of disabilities. The ability of each and every player was evident and celebrated. Congratulations to all.

Most Valuable Player Unified Team. Jeremy (Voted by the other 7 teams)