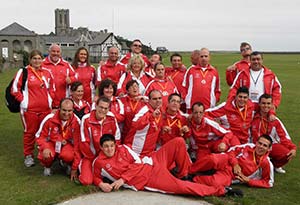 The team arrived on the island in extremely bad weather making it a change from the heat in Gibraltar. For the football team though these adverse conditions were unwelcome since at the last minute IOM had had to change the venue of the 5 a side competition to an  outdoor, high grass and sludgy pitch.  It was constantly raining and our players found themselves slipping and sliding everywhere. A new, and it has to be said, a good experience for them.

Bocce was a highly supported sport at these games. Coach Paola Poggio was extremely pleased since it is a brand new sport for Gibraltar and with limited training the Gibraltar athletes managed to win 4 medals between them. They were highly commended by the Europe/Eurasia Bocce Sports Advisor Roy Savage.

Other sports venues were well run and the team met many familiar faces that through the years had participated in our own National Games.

The team was hosted in the King William College, Douglas.  Hospitality was brilliant and because Gibraltar and Isle of Man have very strong links the athletes and coaches felt very much at home seeing so many familiar faces, coaches, families and volunteers.

Our warmest thanks need to be given to all those sponsors who have helped in any way with in kind goods or sponsorship to enable the team’s participation.